In the previous dev diaries, we have talked a lot about new features and mechanics we are implementing in Panzer Corps 2. But what about the core game mechanics which have always been a fundamental part of the game? Will they remain the same, or will they change in the sequel? In this issue of the dev diary, we’ll discuss how some of the core mechanics are going to be transformed.

In a real war, late victory is often no victory at all, and the game represents this. The player must not just achieve the victory, but achieve it in a limited number of turns. This requires proper planning and strategy, instead of just rolling slowly over the map and eliminating scattered groups of enemy units with the concentrated power of the core force.

All this remains true in Panzer Corps 2. But we were surprised how many players feel that turn limit is an artificial limitation which detracts from the fun of the game. For such players, we are also adding an option to disable turn limit completely. Adding such a checkbox is the easy part. The tricky part is to make sure the game remains balanced, and fun with this option turned on. We are making sure that it is not possible to “harvest” more useful resources (prestige, experience) by staying in a scenario indefinitely, and that enemy units provide an adequate challenge.

Prestige is this game’s currency, and, as its name implies, it is awarded for your successes on the battlefield. In Panzer Corps, there were certain exceptions from this rule, like Minor victory giving more prestige than Major, and this created a lot of confusion. In Panzer Corps 2 we will avoid any such things. Better performance will be rewarded with more prestige.

Unit slots determine how many units the player can have in the core force, which travel from scenario to scenario in a campaign. In Panzer Corps, every unit occupied a single core slot. In Panzer Corps 2 this will change so that a unit can occupy one or several slots. More powerful units will take more slots.

Such an approach is not a novelty, it was used in a lot of similar games before, and many people thought that we had to implement it in Panzer Corps already. But of course, this change is significant and fundamental. The way it worked before, optimal core structure was obvious – you wanted to use all the best units available. Maybe you were not able to afford these units right away, but this was a clear goal to go for in the long run. It is no longer as clear-cut. What is better: 3 Tigers IIs, 5 Panthers, or some combination of them? Maybe add some Panzer IVs, and Tiger Is to the mix as well? With changed unit slots mechanic, we expect to see much more varied core forces in Panzer Corps 2, and they will probably become more realistic too.

Same is true for transports. Better transports cost more slots, so using them for every single unit in the core might not be a good idea.

At the same time, we are not going to introduce specialised slots, for example, ground-only or air-only ones. We want the core composition to remain flexible, and the players are still free to go with ground-heavy or air-heavy cores if they prefer. 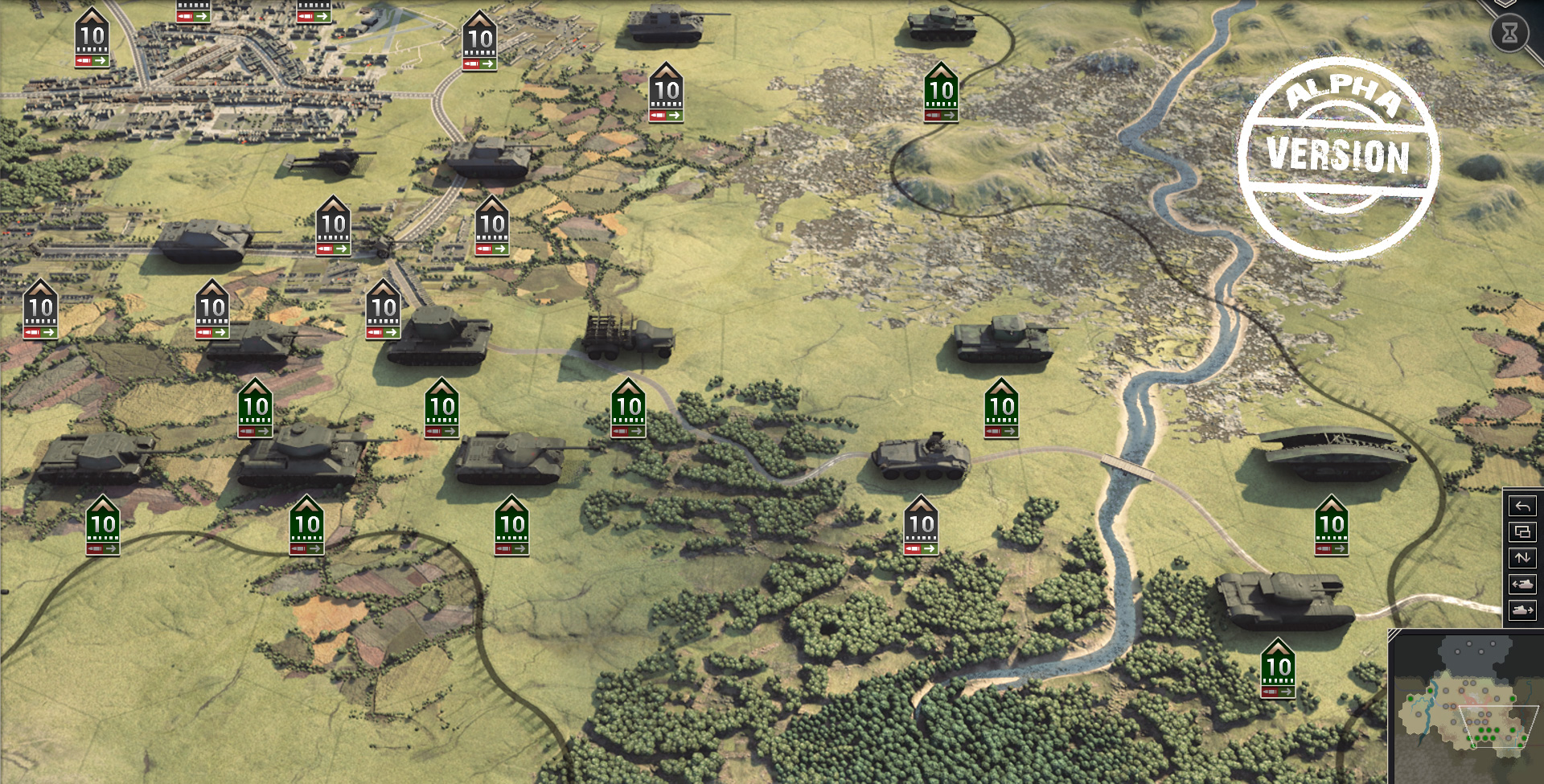 Overstrength units (i. e. units with more strength points than their type has typically) have always been very popular with our players, and in some cases, they become outright necessary, especially when your opponent has more powerful units in his roster. We felt that it was imperative to keep this mechanic in the sequel.

At the same time, overstrength was a big problem with game balance, while its connection to experience felt very artificial, and because of this, overstrength became significant only in the later part of a campaign. We wanted to solve these problems. In Panzer Corps 2, any unit can get overstrength directly in the Purchase screen, from the very beginning of the game. But such units cost more prestige and slots than usual, so you can have fewer of these. A balanced core will include both overstrength and regular units, but the player will need to figure out perfect ratio for himself.

Entrenchment mechanic will remain fundamentally the same. Stationary units will accumulate entrenchment over time (infantry and towed guns faster, other classes slower), and it will give various defensive bonuses in combat. But in Panzer Corps 2 we want to make this mechanic even more critical. There will be more entrenchment levels, and specialised units (heavy artillery, strategic bombers, engineers) intended to destroy them quickly.

Another significant change is that, unlike Panzer Corps, base entrenchment provided by terrain will not be destroyed. Base entrenchment is a defensive bonus created by the terrain itself (forest, hills, mountains), and no bombardment can significantly reduce this bonus.

Support fire is another signature mechanic from Panzer Corps. It is a prime example of interaction between units, and it allowed the defender to create “clusters of defence”, which were not so easy to “crack” by the attacker. All this remains true in Panzer Corps 2 too. However, we felt that in the prequel artillery was not very useful in support fire role against tanks, while the class of AT guns was underused. So, in the sequel artillery will provide support fire against soft targets, while AT units will provide support fire against hard targets.

This is it for today. Thanks for reading, and if you have any questions about how core game mechanics will work in Panzer Corps 2, post them in the comments. See you in the next dev diary!